Lebo Mathosa’s grave gets a makeover with R150k tombstone

Lebo Mathosa’s grave has gotten a makeover after it was reportedly vandalized and damaged The late singer died in a fatal car crash in 2016, and her grave situated at the Phumlani cemetery in East Rand, Johannesburg has been given R150 000 new tombstone. According to Drum, the brother of the late star, Solly revealed…

According to Drum, the brother of the late star, Solly revealed that Manyano Memorials offered the new tombstone, which was a picture of Lebo wearing heels and a short dress.

“Drama Queen” was written boldly on the tombstone. 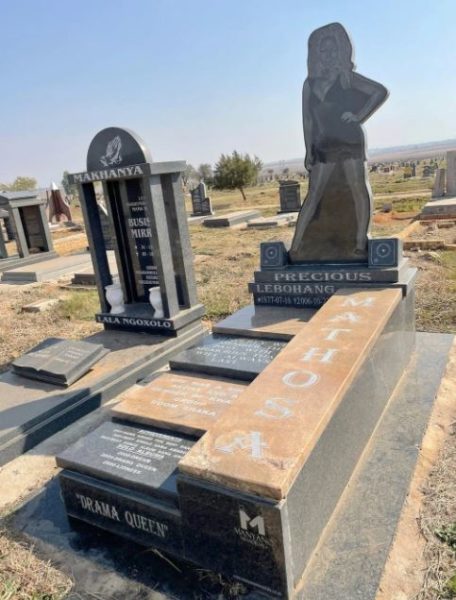 Speaking about the offering, the funeral home said,

“As a music icon who was and is still highly celebrated throughout the country, we wanted to honour her memory in a fitting way for the kind of person she was.”

They added: “It was a pleasure for us to contribute toward the legacy of Lebo Mathosa. We wanted to do something that will match her stature and go all out. The stone was completely destroyed.”

“We went all out, not because there was any monetary gain, but because we wanted to play our part. We grew up listening to her and she comes from the same area as us in Ekurhuleni. She inspired a lot of youth, and this is the least we could do.”