Season two leads Amanda Grace Jenkins, Danny Escalante and Markelle Smith exclusively relived the holiday magic of filming the sexy festive series ahead of the Thursday, Nov. 25 premiere. And let’s just say there were a few faux pas under the mistletoe.

“It was a feeding frenzy,” Amanda, identifies as a lesbian, joked about the dating competition series. Danny, who identifies as straight, noted it was a “free for all” with love interests.

Markelle, who identifies as gay, teased that there was “definitely some crossover” between his “hungry, hungry hippo” suitors. “I just had to let it happen, let the process happen as it was going to happen,” the New York-based dentist dished. “I feel like it ended the way that it should have.” 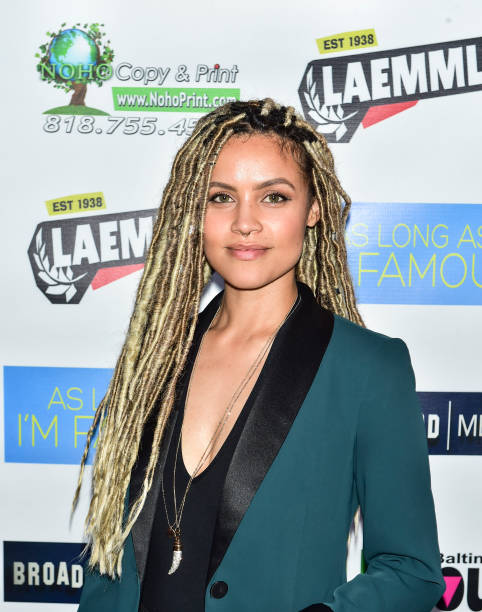 The seasonal dating reality show takes place at a storybook winter wonderland castle as Amanda, Markelle and Danny try to find the special someone to take home for the holidays.

“It was very cute and felt very wholesome and definitely the magic of the castle and all of that pulled me in. I feel like they definitely picked a place to have this that looked like painting. Just the big, beautiful lodge decorated for Christmas, it definitely swept you up like, ‘Wow,’” Amanda explained. “That’s what got me interested and I was like, ‘Well maybe I could actually meet someone.’”

Danny had actually already met someone…and that’s how he ended up on the series!

“One of the girls was recruiting for the show and swiped me on Bumble. I matched her and we’re talking about going on a date,” Danny recalled. “She was like, ‘I actually missed you, I’m back in L.A. now, but how about a reality TV show? Have you thought about that?’ And I was like, ‘Oh darn it, I’m getting scammed here.’ But then we hopped on a FaceTime and it was legit. After a little while, she goes, ‘If you come audition for the show, we can go on a date or whatever,’ so I was like, ‘Sign me up, I guess. Why not?’”

ALSO READ  ‘I Never Knew That Was on This Property’: Ludacris Reveals the Surprising Thing He Found at His Home After Spending Time There During the Pandemic

He added, “Once I processed the fact that I might be dating multiple people, that’s a good opportunity. We went that route, but that’s how I was introduced to the show.”

According to Danny, he “clicked pretty instantly” with Markelle and Amanda…and a few of Amanda’s suitors.

“Amanda and I have pretty similar taste so that was kind of funny to find out,” Danny joked. “We talked it out, we didn’t have any issues. It was just a funny realization like, ‘Oh, we’re into the same type of girl.’”

Amanda admitted that she hoped some of Danny’s women were actually for her!

“Not going to lie, there was one of yours Danny, well, more than one, where I was like, ‘Is that for me? I hope so,’” Amanda teased.

And, per 12 Dates fashion, there were “some pretty fantastic entrances” on theme with the holidays.

“A staple of the show is you’ll never know how somebody is going to appear,” Danny noted. “That’s one of the exciting parts about it.”

With all that excitement, anticipation and love in the air, Markelle quipped, “We handled ourselves as adults the best we could.”

The post The cast of 12 Dates of Christmas previews the hot and heavy holly-jolly season appeared first on SSiTV.

Benefits of a cold shower

Ramaphosa: SA still under Level 1 – but that could change SOON